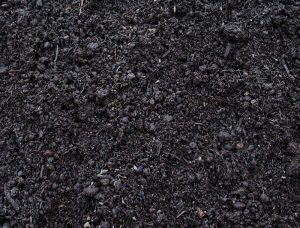 Topsoil is the upper, outermost layer of soil, 2 inches to 8 inches. It has the highest concentration of organic matter and microorganisms and is where most of the Earth’s biological soil activity occurs.

It is rife with microorganisms, organic matter and nutrients that feed plants. Most plants do not extend their roots lower than the layer of topsoil, for it is there that they derive their nutrition. Topsoil contains 13 essential nutrients to feed plants. They dissolve in water and are absorbed by plants’ roots.

What is Topsoil made of?

There are 13 nutrients for certain in the composition of topsoil, but there are many other elements to it. Good topsoil contains an abundance of broken down organic matter. As plants, vegetables and anything else organic dies, it slowly decays, and the nutrients are returned to the topsoil from where it came. Subsoil or the layer directly below topsoil, consists of hard-packed dirt and clay. It is largely unsuitable for anything organic except for large tree roots. Other elements of topsoil include sand, manure of various types and very small pieces of rock and stone. Its composition varies based on location, for topsoil is not the same everywhere.

Organic matter, microorganisms, nutrients, sand, manure, rock and clay can all be detected in topsoil as can water, one of its most diffuse yet important elements. Topsoil has been called many names, such as amended topsoil, native topsoil, organic topsoil, manufactured topsoil. Gardeners wanting to use topsoil as a means of improving soil’s performance for increased plant growth should note that topsoil should be incorporated into the native soil to help increase water movement and drainage, which prevents plants from receiving too much water. Performing tests for soil acidity, porosity and nutrient retention can determine whether or not the soil is conducive to optimal plant growth.